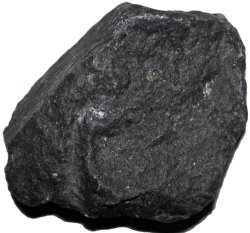 Basalt is a fine-grained igneous rock composed mainly of plagioclase and pyroxene, and it is black because it has a high iron content. The rock is derived from magma ejected to the Earth's surface and solidified from lava flows. Beneath the Earth's surface basalt is the most common type of rock. This is particularly true for the basalts in ocean basins which constitute most of the top 1–2 km of the oceanic crust and cover nearly two-thirds of the Earth's surface beneath the oceans.

As mentioned above the main constituents of basalt are plagioclase and pyroxene. Plagioclase is a group of feldspar minerals which are a homogenous mixture of albite (Na(AlSi3O8)) and anorthite (Ca(Al2Si2O8)).

It is therefore not surprising that chemical differences can be found in basalts from different tectonic regimes. So we have, for example, a mid-ocean ridge basalt type - commonly referred to as MORB. As the name indicates, those basalts are formed along the entire length of the Earth's mid-ocean ridge system (some 65 000 km in length). MORB can be further subclassified into normal or N-type MORB (N-MORB) and enriched or E-type MORB (E-MORB). N-MORB from different regions have quite similar average major element compositions, although N-MORB from slow-spreading ridges has higher levels of MgO, Na2O, Al2O3 and is lower in FeO and CaO/Al2O3 content than basalts in medium and fast spreading ridges such as the Pacific ridge.

E-MORB is rich in highly incompatible elements. The classification is based on K/Ti ratios (E-MORB [K2O/TiO2]×100>13). As well as having higher K2O content than N-MORB, E-MORB have higher concentrations of P2O5, TiO2, Al2O3 and Na2O and lower concentrations of SiO2, FeO and CaO. There is a positive correlation between these characteristics. As MORB moves from N-MORB to E-MORB there is an increase in incompatible elements and an increase in radiogenic Sr and Nd isotopes. 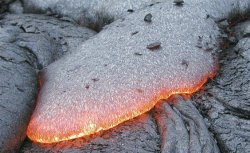 Another type of basalt is Ocean Island Basalt (OIB). OIB is formed after volcanic eruptions in oceans but away from tectonic plate boundaries. In such areas ocean island basalts form seamounts and in some cases, enough material is erupted that the rock protrudes from the ocean and forms an island, as has happened with the Hawaian islands, Samoa, and Iceland. Whereas MORB is a result of partial melting of the upper mantle which has already been recycled many times, OIB is formed from a deeper part of the mantle (deep-sourced mantle plumes that feed hot spots like Hawaii or the Canary Islands) and is therefore less depleted of incompatible chemical elements.

Next there are Oceanic Island Arc Basalts, abbreviated as IABs. IABs are characteristically rich in large-ion-lithophile (LIL) elements (e.g., Sr, Rb, Ba and Pb) relative to the rare-earth elements and depleted in high-field-strength ions (e.g. Zr, Nb and Hf) relative to N-MORB, Intra-plate basalts (IPB) and other basalts. The enrichment of some LIL and volatiles suggests a multi-stage petrogenetic model involving subducted oceanic crust (± sediments), dehydration/volatile transfer, and partial melting of metasomatized mantle beneath island arcs (Mantle metasomatism refers to compositional changes in the mantle wall-rock due to interaction with mantle fluids). Island arc and continental tholeiites (a series of igneous rocks that are richer in silica and iron and poorer in aluminum than basalt is) are less mafic (mafic rocks are relatively richer in magnesium and iron such as pyroxene and olivine) and more siliceous than MORB.

The term large-ion lithophile element (LILE) is often used but is poorly defined in the geochemical literature. The word "lithophile" comes from the classification of elements suggested by Goldschmidt over a hundred years ago. It describes elements that have an affinity for silicate phases in the Earth. As shown in the periodic table below (elements in red) the lithophile elements are numerous and are present at both ends of the table.

Recently multiple samples of new basalts have been recovered from the Amami Sankaku Basin (ASB) (see ref below). ASB is underlying and located west of the Izu-Bonin-Mariana's oldest remnant arc. The Izu-Bonin-Mariana (IBM) arc system is a tectonic plate convergent boundary some 2800 km south of Tokyo, Japan. The IBM arc system was formed as a result of subduction of the western Pacific plate and is part of the "Ring of Fire" - a horseshoe-shaped belt known for regular volcanic eruptions and earthquakes. The 'Ring of Fire' stretches about 40,000 km around the Pacific, and is thought to have begun forming at least 50 million years ago.

To unearth this new basalt an international group of scientists used JOIDES Resolution (Joint Oceanographic Institutions for Deep Earth Sampling). This is one of the scientific drilling ships which has been in use since 1978. In the last 10 years or so it has been significantly modernised to include up-to-date laboratory facilities. JOIDES "Resolution," sank drilling equipment 6km down to the ocean floor of the ASB.The scientists then drilled a further 1.5 km into the ocean floor, extracting samples that had never before been examined by scientists.

The researchers believe that like MORB, ASB basalts crystallised in a sequence of spinel > olivine > plagioclase > clinopyroxene. However, the high Mg number and strongly aluminous character of the clinopyroxene and the presence of spinel spanning a large Cr-Al-Fe compositional range, have not previously been identified in any ocean floor basalt.

The researchers believe that the ASB basalt comes from a clinopyroxene-bearing refractory upper mantle source that had experienced a larger degree of prior melt extraction than that tapped during MORB generation. Refractory, primary liquids arising in various oceanic plate tectonic settings are characterized by high MgO, SiO2, Ca/Na, low TiO2 and are generally low in incompatible elements. There is also some evidence that the water content of ASB was higher than that typical of MORB.

As Dr Ivan Savov, of the Leeds Institute of Geophysics and Tectonics in the university's School of Earth and Environment and one of the researchers who took part in this study, points out: "The rocks that we recovered are distinctly different to rocks of this type that we already know about. In fact, they may be as different to Earth's known ocean floor basalts as Earth's basalts are to the Moon's basalts."