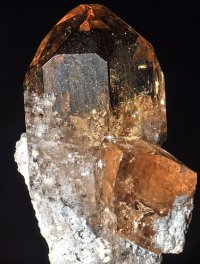 Crystals grown in a day

The size of crystals is traditionally linked to the cooling rate of a magma in which the crystals form. Crystals in exploding lava are usually small, because the magma quickly cools or is quenched, but if magma is held deep in the Earths crust and cools slowly, then crystal formation is slower and crystals have more time to grow to larger sizes.

Or at least that has been the conventional wisdom. Recent studies, published in the magazine Nature Communications have shown that large crystals found in some igneous rocks may actually grow rapidly - very rapidly.

The igneous rocks in question are found in pegmatites, which form during the final stage of magma crystallization. They are known as 'extreme igneous rocks' because they contain exceptionally large crystals and sometimes minerals that are rarely found in other types of rocks. More interestingly, the small size of bodies of pegmatite suggests that the rocks cool relatively quickly.

The name 'pegmatite' has nothing to do with the mineral composition of the rock. Rather, to be called 'pegmatite' the rock should be composed almost entirely of crystals that are at least one centimeter in diameter. So aquamarine, emerald, garnet, zircon and topaz (to name just a few) are all types of crystalline minerals found in pegmatites. Most pegmatites occur in sheets of rock (i.e. dikes and veins. A 'dike' is a sheet of rock that is formed in a fracture of a pre-existing rock body.)

"Pegmatites cool relatively quickly, sometimes in just a few years, and yet they feature some of the largest crystals on Earth," said Cin-Ty A. Lee - Professor of Geology at Rice University in Texas. "The big question is really, 'How can that be?'"

Quartz samples were collected from a mine in Southern California containing pegmatite. These were euhedral crystals of quartz, i.e. well-formed, with sharp, easily recognized faces. The quartzes were transparent and ranged in size from a few centimeters to 10 cm. The samples came from miarolitic cavities (from the Italian 'miarole' meaning 'mineral-rich') which are typically crystal-lined irregular cavities. The central portions of pegmatites are often miarolitic as pegmatite dikes crystalize from the outside walls towards the center. As the crystals grow the volatile portion of the magma is gradually excluded and trapped within the body forming the cavities. These cavities are often rich in unusual or rare minerals containing elements not found in other igneous rocks - for example lithium.

The quartz crystals were imaged using cold cathodoluminescence microscopy (CL). This technique exploits the fact that defects (which are often correlated with trace elements) in the crystal cause luminescence in some minerals. Changes in the intensity of CL were reflected by the change in the colour of different areas of the crystal and these were used to pinpoint areas for geochemical study. Using CL analysis, Lee and his co-workers found three distinct and well-defined areas within their quartz crystals - the core white region, the orange region and the purple outer area.

In the core region (the white area) there is a lot of Ge but the concentration of Al is low - which is expected since aluminium is an incompatible element whereas Ge is compatible. Also whereas Al and Li are relatively constant throughout the inner core, the concentration of Ge increases as we move towards the orange zone. At the contact point between the white core and orange middle zone there is a marked decrease in Ge but the concentration of both Al and Li is increased. In the orange zone, all three elements increase as we move outwards with a particularly marked increase in Al and Li at the border between the orange and purple zone. Interestingly, coming to the purple zone results in no sharp changes in the amount of Ge.

So what does all that mean? The authors suggest that the crystal was initially growing in a steady-state condition (prevailing in the core white region), but then experienced a sudden change in growth rate (at the white to orange transition). Thus, while the core elemental concentrations reflect steady crystal growth, subsequent elemental profiles reflect transient responses to sudden increases in crystal growth.

Based on their analysis, the researchers suggest that the growth rate increased by about 100 times from the core to the edge, with initial growth rates in the order of 10100mm per day in the white core region, but approaching 110m per day in the orange middle region. So to summarize, the crystals which were half an inch wide and over an inch long grew in a matter of hours. The researchers then extrapolated from this to assume that larger quartz crystals could grow in a matter of days.

But the big question is what causes the sudden change in the growth rate?

The authors suggest that it is all to do with how pegmatites are recycled by tectonic activity. Pegmatites form where pieces of Earth's crust are drawn down and recycled in the planet's molten mantle. Any water trapped in the crust becomes part of the melt, and as the melt rises and cools, it gives rise to many kinds of minerals. Each forms and precipitates out of the melt at a particular temperature and pressure. But the water remains, making up a progressively higher percentage of the cooling melt.

Patrick Phelps, the lead author of the paper explains:

"Eventually, you get so much water left over that it becomes more of a water-dominated fluid than a melt-dominated fluid ... The leftover elements in this watery mixture can now move around a lot faster. Chemical diffusion rates are much faster in fluids and the fluids tend to flow more quickly. So when a crystal starts forming, elements can get to it faster, which means it can grow faster."